When looking for a home on the road, the number of options can begin to feel overwhelming. You want something that is easily towable from place to place but that also offers comfort for when to stop to enjoy these new locations. In the end, for space and comfort you want and need, your search will probably be narrowed down to Airstream trailers and fifth wheels.

A fifth wheel is a camper trailer that connects to your truck through a hitch that is mounted in your truck bed--this hitch is referred to as the "fifth wheel." The cab of the trailer comes over part of the truck bed, providing extra storage or sleeping space. 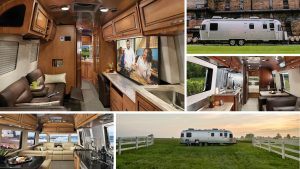 An Airstream is a travel trailer known for its distinctive shape of rounded and polished aluminum coachwork. Their streamlined design is aerodynamic and can boost fuel efficiency by as much as 20 percent over fifth wheels.

Airstream trailers are known for their simplistic design--what you see is what you get. There are no bump-out or slide-out panels for extra space like many fifth wheels offer, but that also means that there is no extra time involved in setting up your trailer before you are out to explore the world. This makes Airstreams well-suited to travelers who will be moving frequently. They are better designed for frequen towing rather than sitting for long periods of time, like large fifth wheels.

Because Airstreams are smaller than fifth wheels, you can hitch them right to your vehicle's bumper rather than the truck bed. This is a huge advantage because it frees up space in your truck bed for additional items such as bikes, ATVs, and more. Their smaller size also means that you don't need a huge truck capable of towing a fifth-wheel that weighs in at over 20,000 pounds. Another advantage to the smaller size of an Airstream is their height. With a fifth wheel, you have to check your route constantly for low-hanging overpasses under which your rig might not fit. 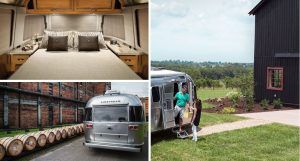 The small size of Airstreams can also be a downside since they feature less storage space than fifth wheels. However, there is also an advantage to this as you are less likely to pack and store items that would keep you inside the trailer instead of out exploring the world. Because a fifth wheel is designed to be a "home away from home," many owners often find themselves spending more and more time inside rather than outside--the exact opposite reason of why you bought a travel trailer in the first place.

Airstreams and fifth wheels are both beautiful and comfortable homes on the road, but Airstreams are often the better, more economical, and streamlined choice. Airstreams are easier to tow, weigh less, and are shorter both height-wise and length-wise. They also offer a classic look and more nimble handling and setup than a fifth wheel. No matter your choice, as long as you take advantage of what the world outside has to offer, you are sure to have an adventure.